Comments, problems, suggestions about Oric emulators (Euphoric, Mess, Amoric, etc...) it's the right place to ask. And don't hesitate to give your tips and tricks that help using these emulations in the best possible way on your favorite operating system.
Post Reply
5 posts • Page 1 of 1

On Windows XP only:

- I launch Euphoric,
- Then I CLOAD a Tap file; example CLOAD"TEST.TAP"
- Euphoric successfully loads the TAP file,
- The program (TAP file) works for about 20 seconds or 1 minute or so,
- Then the program gets "stucked" (even Oric cursor stops blinking!) and emulator refuses to accept F1 or F10 key,
- I exit the emulator by pressing Alt+ESC (or "Win") key that brings me to WinXP desktop,
- Then I rightclick on minimised Euphoric emulator on my WinXP tray and select CLOSE aplication,
- Aplication (Euphoric) is then closed, but after this - the TEST.TAP file is ZERO-byted (emty!!!)

This "bug" is happening ONLY on WinXP on some slow computers.

Any workarround? The Euphoric is 1009 version.
Have You had this kind of bug?
Top

Interesting, i have never ever experienced that here and as for running it on a slow machine, how slow? because euphoric was originally designed to run on a 486 (i think) so by todays standards a slow machine is probably fast!

Are you running it under DOSBOX?
Not that this would cause the issue you are experiencing but would slow down emulation alot more.

What i do know is that Euphoric locks on to the tap file until you load a different tape file or close the app.
Right click closing app whilst minimised to tray may be abnormally terminating the app and causing it to corrupt the tape file.

Personally on a slow machine and xp i would now recommend using Oriculator rather than any Euphoric build. Oriculator is at a better and more accurate stage of oric emulation.
Top

- With CPU at 1GHZ or so,
- With RAM memory of 250Mb or less,
- With WinXP Service Pack 1 and 2
- NO DosBox!!!
- and important update that I missed to mention earlier; Euphoric was running NOT from computer's HardDrive, but from USB Memory stick; attached to that computer; perhaps the Memory stick had something to do with it (will test it futher)...
Top

Re: WinXP eat my TAP file!?

- Only when I recall several different TAP files from within the same BASIC program at the same time, for example:

- then all of them will be successfully loaded in to my program, BUT ONE OF THEM, as a file on a hard drive will then become a file with zero-bytes in lenght until it's written back to hard disk with the store command?!?

BUT IF for any reason in THAT EXACT moment Euphoric (DosBox) be closed by clicking on "X" then the Reg.TAP file would be "eaten"-out.

Hmmm...
In 2010 I didn't used DosBox under WinXP
Instead - I ran Euphoric directly from the CMD
And sometimes (due to the WinXP) Euphoric would "hang"
That is NOT happening under DosBox...
And if Euphoric would "hang" then only way for exiting would be pressing Win keys which would then - render any recall-ed TAP file in zero-bytes lenght.
So - that was the reason 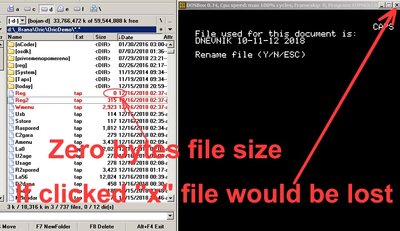 Re: WinXP eat my TAP file!?