Hello all! I'm very happy to present you our new release - cc65-Chess for Oric!
The game is compatible with Oric-1/Atmos/Pravetz-8D/Telestrat and comes in TAP format for easier usage. 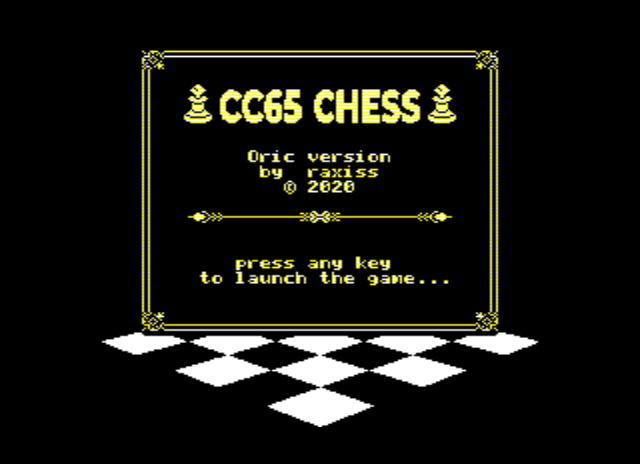 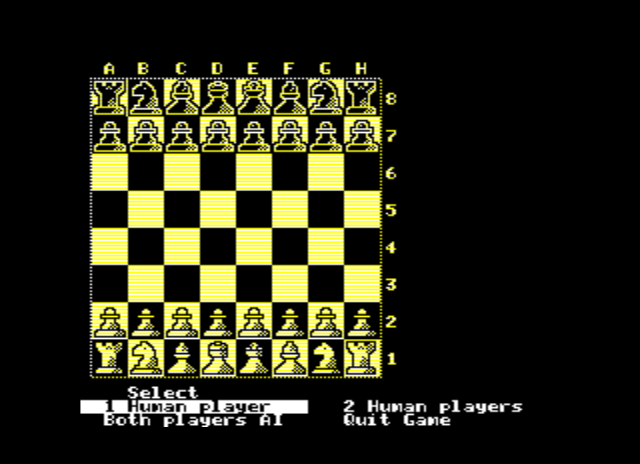 
The story: everything started from a message (comp.sys.apple2).
In 2014 Stefan Wessels created cc65-Chess for the C64. It was completely written in C using cc65.
The game and UI logic are separated from the actual board and UI rendering which allows easy porting across 8-bit platforms.
In January 2020 Oliver Schmidt ported cc65-Chess to the Apple II and this helped a lot to have in May 2020 the Oric port ready!

Oric related source code is freshly merged and can be found in the main github-repository. Compiled TAP file is available here.

Well, and because the port was really easy and fun, I decide to make a full finished game release! Enjoy it!

Question: Does the game uses a lot of memory for the AI? I was wondering if that would help to auto-detect the presence of a disk controller to use the upper 16k of ram for additional search tree capabilities?

The intro is great !! It says that the pulp fiction music comes from a midi file .. I long to see how you managed to play a midi file on an Oric.

The level at chess is poor as it could be exepcted from a 8 bits machine but the rules of the games seem to be properly implemented (as far as i could see).

At first I foundd that the keyboard handling was making the games allmost unplayable . But in fact I had not understand that when we select a piece with space, it considers that we are trying to move the piece at the same place (so it writes in red) and then we can select the destination for this piece.
Here's where I am at the moment in my first game at level very hard: 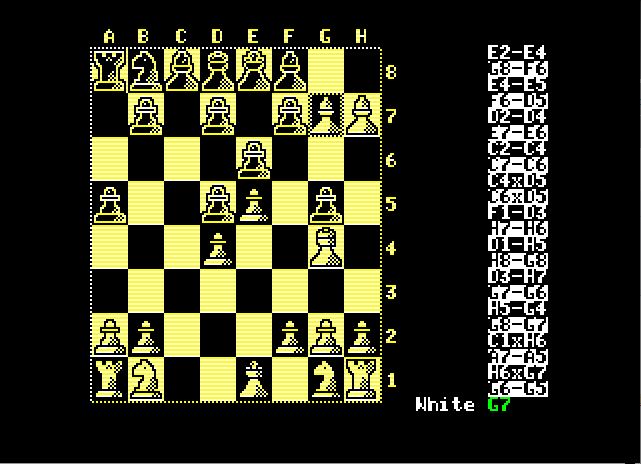 I think I'm gonna mate it soon .. it made two terrible mistakes and now I think it can no longer defend the position.
niark niark

Thank you for this game !! and congratulation for the port .. I long to have a look at the source code
Top

Here's a soluce on how to beat it in 17 moves at level very hard on its Alekine's defense.
My 8th move is a very bad move .. but well .. it didn't punish me for that. 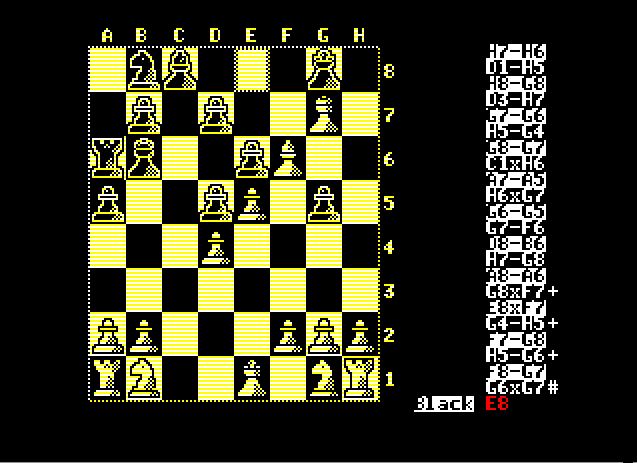 This is great, and I just want to acknowledge the 'edge' that this release has as a result of the care to graphical styling .. it could have been a bit of a boring chess game with just plain chars, but the styling of the board pieces and the font make all the difference to the 'feel', which I think is neat.
Top

Thanks for this new game. Rax & Iss duo is the new best Oric Game Producers
I tried it (without sound) and it's a pleasure, even if my chess level seems to be lower than jb's one.
coco.oric as DidierV, CEO Member
Historic owner of Oric, Apple II, Atari ST, Amiga
Top

Yeah, very nice! I am very happy to see new good developments on the Oric.

Dbug wrote: ↑
Sat May 16, 2020 6:54 am
I was wondering if that would help to auto-detect the presence of a disk controller to use the upper 16k of ram for additional search tree capabilities?

I casted an interested glance at the source code of AI and I can see two different method to use an extra memory as a way to enhance the chess skill of the program:

The idea would be to store a tree of usual and popular first moves sequence?
There are plenty of such opening book on the internet in text format.
With such an opening book, the game could play a perfect chess in the opening part which is the most critical part and the part where the brute force computation can not replace experience acquired by human players across centuries of practice.
16k is enough to stored a valuable opening book if it is properly compressed.

I don't know if the extra 16k can be used as stack, but ifis it the case then it could possible to make the AI think deeper.
The call to the thinking function is here:
https://github.com/StewBC/cc65-Chess/bl ... cpu.c#L596

The thinking recursion is configured through three different values: This values are given for all 4 possible levels in the array defined here:
https://github.com/StewBC/cc65-Chess/bl ... bals.c#L46

If we could change the 3 last value of this array from "16,3,1" into a combination where the 3 (gMaxLevel) is replaced by a higher value, it would clearly enhance the chess skill of the engine.. but it would lead to:
- a far longer thinking . so the 16 (gWidth) would have to be lowered
- a greedy consumption of ram . Not only for the stack, but also for the undo list which is declared here:
https://github.com/StewBC/cc65-Chess/bl ... undo.c#L40

can be increased without nasty side effects
Top

I don't know if the extra 16k can be used as stack, but ifis it the case then it could possible to make the AI think deeper.
it would lead to:
- a far longer thinking . so the 16 (gWidth) would have to be lowered
- a greedy consumption of ram . Not only for the stack, but also for the undo list which is declared here:
https://github.com/StewBC/cc65-Chess/bl ... undo.c#L40

I don't think the memory is a real limitation in increasing the depth of thinking. The computation time will for sure become more limitating.

However, the cpu time could possibly be reduced by using precalculated index in the process of possible moves generation which starts here:

In most function called in the move generator, the chess_board is accessed trough a two-dimension indexing :

rather than , like other part of the code, thruogh a single dimension indexing:

If we could store precalculated position index for running through diagonals, lines, columns, knight shapes , and so on ...
we could replace part of code like this one:


Then we could transfert some cpu time load to memory load. That would allow to play with depth of thinking without exploding the computation duration.

Thanks to all for the nice words!
This definitely will keep the tempo of new release high (... if you only "can smell what the raxiss is cooking"


Dbug wrote: ↑
Sat May 16, 2020 6:54 am
Question: Does the game uses a lot of memory for the AI? I was wondering if that would help to auto-detect the presence of a disk controller to use the upper 16k of ram for additional search tree capabilities?

All platform dependent functions are defined in plat.h. I've created a 'fake' platform with all these functions as empty:

Congrats for the great source code analysis! It looks really promising!
And having Apple][ badly beaten - that's what I want to see

Here is how I won in 7 moves on 'Very Easy' level but this are all my chess skills too: 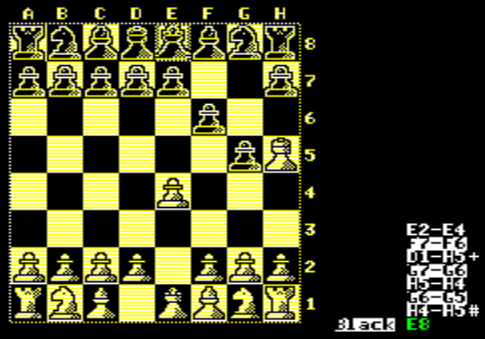 Else about the porting - it was really easy with the well structured code and the Apple][ implementation as template.
The intro was more challenging I put lot effort there to solve many small details as:
- use Arkos Tracker 2 AKY music player by Julien Névo a.k.a. Targhan/Arkos converted to 6502/Oric by Arnaud Cocquière a.K.a GROUiK/FRENCH TOUCH a.K.a Scalex, There was real bug in code but this 'music story' deserves whole new topic;
- be compatible with Oric-1 and Atmos/Pravetz-8D - no ROM functions are used;
- implement nice HIRES switching without ugly bars/lines on screen;
- implement 'Loading...' progressbar like animation 'ala Twilighte's magic trick';
- make the scrolling Text/Bitmap script controlled and frame synchronized;
- rax painted 3 chess-boards, 3 chess-pieces sets and 10 different dividers to select from;
- ... and lot lot more including fun!

The demo is fantastic !
The game is nice to play.

Didn't know Dwayne Johnson was on Oric .. this guy is definitely cool

That might be an interesting challenge .. If i manage to recompile the project, i'll try the various ideas i've got on how to enhance the thinking part.


iss wrote: ↑
Sat May 16, 2020 6:22 pm
- use Arkos Tracker 2 AKY music player by Julien Névo a.k.a. Targhan/Arkos converted to 6502/Oric by Arnaud Cocquière a.K.a GROUiK/FRENCH TOUCH a.K.a Scalex, There was real bug in code but this 'music story' deserves whole new topic;

It offers some very interesting possibilities. DBug knows how to get 16 more kilobytes thanks to that.

Graphics are very nice and the text scrolling is so cool.. all that contributes to make the game very beautiful. Congratulations. and thanks again.
One more jewel in Oric's patrimony.
Top

When I try to build the project with instructions provided in the readme file, it says that there's no rule to build the target "cc65-chess.oric" required to build "cc65-Chess.tap".

Am i missing something ? (other than cleverness that I know I've been missing for more than 40 years now)
Top

Main repository was just updated by StewBC: https://github.com/StewBC/cc65-Chess
But there is a small bug somewhere, so for successful build follow this steps exactly.
1. Include 'path_to/cc65/bin' in your PATH environment variable
2. Download the repo (the used upper/lower case is important!) :

The build failed on target cx16 (which was added recently I presume)
I removed it from the makefile and only left apple2 and oric and I got the .TAP ..